I wrote this article which appeared September 7, 2012 on the newsline page of Metro, the Portland-area regional government. I'm the biker referred to in the last paragraph and I can attest that riding the length of the Fanno Creek Trail (including unfinished portions), from the Garden Home Recreation Center to the Tualatin River in Tualatin, is a wonderful bike ride. Flat, both directions! Such a treat for us Portlanders.

A rutted footpath once followed a creek through the Tualatin Valley, guiding generations of native peoples on migrations between the falls of the Willamette River and the Oregon Coast. In 1847, immigrant Augustus Fanno followed this path. Finding rich soils along the unnamed creek, Fanno claimed the land. Later, railroad builders chose this time-tested route for a new kind of transportation corridor. By the 1970s, much of the rail line went unused – but the ancient pathway was not forgotten by the generations that followed.

A vision was born: a 15-mile walking and biking greenway to connect Portland to the cities on its southwestern flanks. Today the Fanno Creek Trail, despite some remaining gaps, does exactly that. Creating it has been like assembling a five-city jigsaw puzzle.

"The Fanno Creek Trail is much greater than the sum of its parts," says Kathleen Brennan-Hunter, Metro's Natural Areas Program director. "So many different organizations and agencies have brought pieces of it to the table."

The plan started in 1975: a trail from the Willamette River in Portland to Fanno Creek's confluence with the Tualatin River in Tualatin. During the next quarter century, major sections were built in Beaverton and Tigard. Besides running across or near land owned by scores of public and private interests, the trail passes through five cities, two counties and many neighborhoods, across busy roads, and along a floodplain vital to the health of wildlife and water quality.

The result: a trail used by an increasing number of commuters and recreational walkers and bicyclists.

One July morning, Susan Frost stopped along the trail to join two fellow walkers peering into summer-shallow Fanno Creek. "I've seen eagles, herons, a white egret, coyotes and even a honeybee swarm in an old oak," she said. "I feel energized by the beauty on the trail. Every day I see something new."

Closing gaps in the trail benefits water, wildlife and people

A regional trail isn't truly regional until enough discrete segments have been connected. In 2012, the Fanno Creek Trail is reaching this benchmark, thanks to the commitment of local partners and community volunteers.

In January, a 0.6-mile segment opened in Beaverton, between Scholls Ferry and Denney roads. With two short on-road connections at either end, this segment closed a gap between Garden Home and the trail's longest contiguous stretch: 3.8 miles from Denney Road in Beaverton to Woodard Park in Tigard. This segment, said Wendy Kroger, was 18 years in the making. Until 2011, she was the head of THPRD Trails Advisory Committee and one of the trail's most vocal advocates.

"I was a cheerleader, a visionary, a polite prodder," Kroger said. "Some advocated that this segment should run along Allen Boulevard. But we lobbied hard to have it run through the natural area, writing letters, testifying, speaking on behalf of permitting and funding requests." That meant a lot more property acquisitions and restoration work. But the result is stunning: an urban oasis with a trail winding artfully around native plants and creek bends under a canopy of tall firs.

In Tigard, two trail gaps are getting closer to construction and a new acquisition will offer a large piece of parkland along the trail. When new sections open, walkers and bikers will be off the streets and next to the creek.

Trail work is not all about closing gaps, Brennan-Hunter said – it's also improving Washington County's water quality. Since 2006, Clean Water Services has converted 800 feet of once-straightened stream channel in Beaverton's Greenway Park to 1,200 feet of meanders and floodplain, and planted 80,000 native plants.

This focus on water quality and wildlife habitat was not a primary goal of trail planners, who in the 1980s and 1990s developed trailside parklands in the style of traditional urban parks, with playgrounds, ball fields and picnic shelters. Joe Blowers is a middle school teacher and president of the Tualatin Hills Park & Recreation District's board of directors. He and his students have been working on Fanno Creek tributaries since 1994. Blowers called out Englewood Park in Tigard as a place where growing knowledge about riparian habitat has changed greenway design.

"When it first opened, the park was grassy, with lawns mowed right up to the creek," Blowers said. "Today about 11 acres, especially in wet areas, are left unmown and have been replanted in native plants – swaths of marshy grassland, Ponderosa pines and willows."

The trail's newest section in Beaverton highlights state-of-the-art trail building and streamside restoration. As it returns to its more primeval roots, the greenway, once a near-monoculture of invasives, again offers mammals, amphibians and fish a refuge in an otherwise intensely urban setting.

One trail element still missing is signage, making it a bit challenging to find some trail segments. Way-finding signs scheduled to be installed next year along the entire trail length will help bicyclists and walkers navigate, particularly in the gaps.

"We're really close to completing the acquisitions, but there are still gaps over big streets." Brennan-Hunter said.

Most of the trail's street crossings have pedestrian-activated or painted crosswalks. But one of the busiest crossings still to address is at Hall Boulevard in Beaverton. There, a tunnel and bridge were rejected as too costly. People must leave the trail, walk to a stoplight and then return. The solution, due in 2013, will be a mid-block crossing, with a pedestrian-activated crosswalk that triggers a red light for cars.

It may take 10 more years to build out remaining gaps in the entire 15 miles of the trail, from the Willamette River to Tualatin. Even so, the trail is already a busy regional corridor that offers places to play, a beautiful commute, and connections to downtowns, neighborhoods and shopping.

As one cyclist pedaled the nearly flat length of the trail on a warm July day, she drafted off a dragonfly, heard freight trains wailing in the distance, nodded to countless other bikers and walkers, and tasted a few early berries along the way. The Fanno Creek Trail – a regional gem created by the vision and persistence of hundreds of people over nearly 40 years – combines community involvement, urban planning and Oregon beauty.
Posted by Laura O. Foster at 1:54 PM 9 comments:

Trails updates to walks in the books

The revised edition of Portland Hill Walks is coming out March 2013 with five new walks, some of the long--6 to 7 miles. All were revised and one walk was cut. The new book will have 24 walks.

Portland Hill Walks
Walk 9 Willamette Park to Terwilliger Loop
The trail at point 7 on the map is closed due to construction on I-5. Suggested change: at point 6, don't descend the trail in George Himes Park; instead, return to point 3 by using the map or retracing your route.  It will be a few more years, I think, until the construction is over and the trail under I-5 through George Himes is rebuilt.

Walk 12 Dunthorpe Gardens
Berry Botanic Gardens is permanently closed. But the Bishops Close is still worth a visit.

Walk 13 Sellwood
The trail up the bluff between point 2 and 3 is washed out, permanently. A new trail has been built. From point 2 in Oaks Bottom, veer southeast toward the bluff and you'll find the new trail. It climbs the bluff and ends at the same place, point 3, on the map, so the detour is slight.


The Portland Stairs Book
p. 87 Outer Southwest Peaks and Valleys
This uses the same George Himes Trail mentioned above, so instead of crossing under I-5 via that trail, cross over I-5 on SW Brier Place (it's on the map).
Posted by Laura O. Foster at 9:14 AM 4 comments:

Until around 1904, most Portland sidewalks were wood. In that year, a city ordinance declared no wooden sidewalks

"shall be built or constructed hereafter upon any street (in Portland in certain districts); [it is] the duty of the property owners to construct sidewalks of artificial stone, vitrified or repressed paving brick or asphalt.” 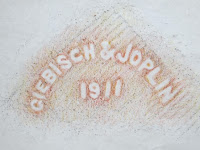 So one era ended and in this decade,
most of our “artificial stone” sidewalks are turning the century mark.


﻿﻿
One Portlander couldn’t let the moment pass unnoticed when her sidewalk, in historic South Portland, turned 100 this year. Katie Urey, a GIS professional and board member of the Willamette Pedestrian Coalition, threw her sidewalk a party in August and I was delighted to have been invited.