A New Walk: Goose Hollow to Top of Skyline 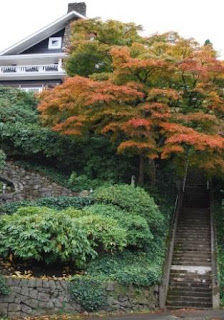 Steps from Westover/Cumberland/Fairfax
up to Cumberland.


At the top of the stairs, turn right. You’re on NW Cumberland Road. Follow it to its dead-end, passing great homes along the way including the home of Clarissa Inman, inventor of the electric curling iron (it’s the grandest one; you can’t miss it). And isn't the name Clarissa just right for the inventor of a beauty product?

From the dead end of Cumberland: enter the forest; at a fork where the Tunnel Trail goes right, ignore it; stay left on the Cumberland Trail. At the second fork, the Wildwood Trail is on the right; take it. The views as you hike along the 550 foot contour line (more or less!) are neat: looking down on Cornell Road, you can see how it spans several canyons; you can’t see this when you’re driving it. Big Douglas fir here.

The Wildwood comes to a pedestrian crossing of Cornell. Watch out for the drivers who won’t acknowledge you and cross carefully. Follow a trail leading west toward the Audubon Center. It runs behind the Macleay monument and some old restrooms.

At Audubon is a great place to shop for gifts, use the restroom, see some rescued birds and peruse their great selection of books. A purchase here is not enriching a corporate bottom line but adds to the funds Portland Audubon uses to provide this wonderful natural sanctuary so close in to Portland neighborhoods. See www.audubonportland.org.

Exit the Audubon Center, re-cross Cornell and walk west on its south side, on a narrow shoulder, about .1 mile to a parking area for the Collins Trailhead.

Here is the base of the Collins Sanctuary (86 acres), land given to the Oregon Parks Foundation in 1976, a legacy of the Collins Family Foundation. This acreage is the birthplace of the Audubon Society of Portland’s work to restore the natural landscape around it and provide wildlife habitat.

Of the three Audubon sanctuaries (we'll see one other), it has less mature Douglas fir, hemlock and Western redcedar and is dominated by an alder forest. Over the years, English ivy and other invasive plants powered their way into this forest. To the rescue came Metro http://oregonmetro.gov which purchased the land from the Oregon Parks Foundation in 2008. (With money from the 2006 bond measure).

Since then, Metro and Audubon have removed invasives (piles of ivy and dead-hanging ivy are evident). Also targeted were laurel, clematis and holly. The forest now has an open, clear aspect that makes for a lovely walk.

During its 2009-10 planting season Friends of Trees invites Gift Trees donors and recipients to plant trees that will one day become an old-growth forest here. Unlike typical Green Space Initiative plantings, special Gift Tree plantings are not open to the public. Gift tree givers or recipients are invited to attend, with space capped at 100 volunteers. One Gift Tree planting was December 6. The next is March 28. To be eligible for the March planting, donate a gift tree or a grove between now and the end of February.

Keep left where the trail forks to stay on the South Collins Trail (it’s a loop). Continue on it as it curves right. At a sign for the trail loop, leave the loop and go left on a faint, unmarked trail (it becomes clearer) that heads uphill. It’s an old road and leads up to a series of roads off of NW Skyline Boulevard.

New trees planted in December 2009 each sport a colored flag, so at one point you feel you are walking through a small woodland festival.

The woods end at a street. Go left, walking around a chain link fence. Then take a right on Dover, left on Winston and left on Royal Boulevard (in other words just keep climbing).

Eventually you leave the older streets and come to a new development, Meridian Ridge, where lots have not yet been built on. Ahead is one of the most wonderful staircase views in town. 167 steps take you there. Turn around often to see the great mountain views from up here. 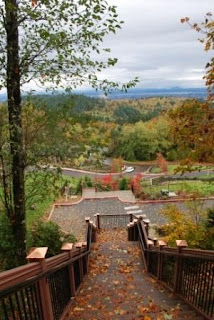 The Meridian Ridge Steps on an October morning
with no mountains in sight! Great clouds though.
At the top of the stairs, turn left on Skyline, walking a fairly narrow shoulder, but with good sight lines. Cross Skyline carefully and enter Willamette Stone State Park.

Here’s a bit of background. You know how when you buy property or mortgage it, the documents have a legal description of the land? That description, if you’re anywhere in Washington or Oregon, is based on your property's location relative to this very spot, the Point of Beginning of the Willamette Meridian. It’s one of 37 Principal Meridians in the United States, each of which is named, that define the United States' rectangular survey system.

With the exception of portions of the eastern United States and Texas, the United States is divided into a grid of six-mile squares called Townships and Ranges, known as the rectangular survey system. The Willamette Meridian was established in 1851, before Oregon’s statehood. Surveys completed from this location promoted settlement of the Northwest and began the transfer of land from government ownership to private ownership.

The vertical line is the meridian; the horizontal line is the baseline. They meet here; all land descriptions describe any given property’s location to this spot.The first marker, a red cedar stake, was placed on the site on June 4, 1851, by John B. Preston, the first Surveyor General of the Oregon Territory. The location was chosen such that the base line would not cross the Columbia River and the meridian would lie west of Vancouver Lake. The grid system was an extension of the system used in the Northwest Territory proposed by Thomas Jefferson. The Willamette Stone marked the location of the first townships and ranges north and south of the marker.

Division Street in Portland and Section Line Road in East Multnomah County follow the division between the first and second rows of square-mile sections south of the Willamette Baseline.

http://www.wikipedia.org/ is the source of some of this info.

From the park, continue south (right) on Skyline a very short way, then turn left down Royal Boulevard, then right on Manor and keep descending to the fence you first passed by; reenter the forest at the same trailhead you exited earlier.

In the forest, you’ll re-walk the unmarked path through the new trees, and then come back to the Collins Trail. Turn right on it and when you come to the Founders Trail, turn right on it. This trail on steep hillsides traverses small creeks,tributaries of Balch Creek. The trail dates from 1982. It traverses the Uhtoff Sanctuary: a 34 acre parcel purchased in 1982 and named for Mike Uhtoff, Portland Audubon’s first director, from 1976-1985. He helped acquire this land for Audubon; it was renamed for him in 2004. Watch and listen for the raucous cries of pileated woodpeckers in here.

Balch Creek and its tributaries support a resident population of cutthroat trout of up to about 7 inches (18 cm). In 2005, Balch Creek was the only major water body in Portland that met state water quality standards for bacteria, temperature and dissolved oxygen.

The trail passes Audubon’s plant nursery and then comes to Cornell Road. Cross it, and retrace your steps back to the Wildwood Trail, Cumberland Trail, and Cumberland Road.

From there, I’d recommend eating. Lots of options on and around NW 23rd Avenue.

Hope to see you out there!

Laura
http://www.portlandhillwalks.com
Posted by Laura O. Foster at 5:01 AM

Hi Laura-
I found your blog today and I love it! I am currently a student at PCC taking a geography class and one of our assignments was to watch a few hours of Oregon Field Guide. I found your Portland Stairways episode. What a treat! Is your stairway book out now? And I noticed all your other books too! If you had to pick one favorite hidden stairway what would it be. Again, I love your blog...I will be back often!
Bobbie Bryan
www.bobbieschair.blogspot.com

The stairs book will be out this fall. Favorite hidden stair...that's a good question. Look around on NW Luray Terrace.