MAX and the Mountain: Riding the MAX Green Line to a Mt. Talbert Hike In my years of exploring so many great places in the Portland area I've discovered it's easy to scratch the explorer’s itch without a long drive.
This hike is green in more ways than one: leave your car behind, and hop on your bike or MAX to get to 200 forested, mountainous acres. You’ll very likely be amazed at the beauty that exists just a yodel away from Clackamas Town Center.

This hike takes you from transit stop to wilderness in a surprisingly short time. It illustrates beautifully the benefits of preserving close-in greenspaces. 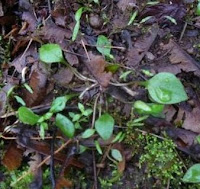 Soft paths, ideal for running barefoot. I’ve run barefoot this winter in temps as low as the 40s, on trails in the West Hills. Try it! Until things dry out, the fir cones are squishy, little branches in the path saturated, and the muddy trails allow your toes to dig in and grab a bit of the earth. It’s one way to strip it down and be a child again. But beware: I didn't see it in February but poison oak is rampant, according to Tonia Burns, Natural Resources Coordinator with North Clackamas Parks and Recreation. She says they cut it back regularly but...if you're worried, the barefoot idea/with shorts may be best saved for a place without the poison. 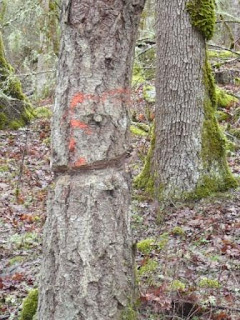 Americans managed many of the Willamette Valley forests similarly, but by burning the firs, creating vast savannahs of oak and grass. 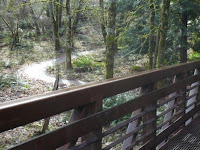