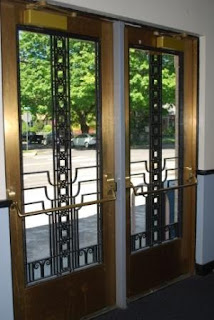 • a compact, charming urban center that’s fun to explore
• an art deco high school with a Timberline Lodge connection
• a bookstore, toy store, coffee shops, restaurants including a branch of Nicholas restaurant (of Portland fame)
• an old Carnegie library (now the Gresham History Museum) that looks like Cromwell could’ve studied there
• a brand new, blocksize Arts Plaza, which makes a great place to relax in a quiet setting
• a living link in Oregon’s agricultural history; plan a visit when the Gresham Farmers Market is operating May through October on Saturdays; it's at 3rd and Miller downtown.

Details:
> Get there via the Blue Line MAX
> Bring money for food, drink, shopping
> The walk is flat, on sidewalks
> Bring your bike aboard MAX and bike the 16 miles back to downtown Portland on the Springwater Trail

Directions:
Take the MAX Blue Line to the stop at Gresham City Hall. In the complex north of the MAX tracks just about everything official in Gresham takes place from fire to schools to arts. Across the tracks a large shopping mall occupies the former site of a mill and log pond.

Walk east across Eastman Parkway on a marked crosswalk north of the MAX tracks. It leads to a path that ends at 12th Avenue and Victoria Street. Walk a few shaded blocks; pretty homes date generally from the 1920s.

At N. Main Avenue is the Art Deco Gresham High School, built in 1940, near the end of the Great Depression. Go over for a closer look. Ironwork at the doors (and visible inside the auditorium if you peer through the doors) is the work of O. B. Dawson, who was responsible for the spectacular ironwork at Timberline Lodge. An interior view is at the head of this blog post. Dawson also did the work at McMenamin’s Chapel Pub (once a mortuary) on NE Killingsworth Street in Portland.

Fun to study are the bas-relief sculptures of athletes above the gymnasium entrance. Also beautiful are the two large gingko trees at the front entrance. Gingko trees are either male or female. While the female's fruits are edible (and grown commercially in China), they're encased in an incredibly smelly little package. These trees likely would not have reached their advanced age if they had been females. Gresham keeps track of its significant trees; find their locations on the City's website.

About 1700 students are enrolled at Gresham High; this school is one of three high schools in the Gresham Barlow School District. I assume the "Gresham Union High School" sign refers to its incorporation of outlying, smaller schools into this one building at the time of construction.

Gresham’s Train History
From the school, walk south on Main. Cross the MAX tracks. Here ran an interurban line starting in 1908 from Portland’s Montavilla area to Gresham and beyond, ending at the confluence of the Bull Run and Sandy rivers. A connecting line ran north to Troutdale. With the line to Portland, a six hour horse and buggy trip was reduced to a 50 minute trolley ride. Students rode the trolley from east county farms to high school in Gresham. Portlanders would use the line to head out to fish along the Bull Run River.

The tracks from Gresham to Bull Run were pulled up in 1930. The rail line, after it ceased carrying commuters, carried freight until the 1980s.

(The Springwater rail line—now the Springwater Corridor, is 25 miles of car free biking; it intersects Main’s dead-end, about six or so blocks south of here.)

Berry era
Gresham was known once as the “Raspberry Capital of the World.” Around 1915, a new commercial crop was introduced to east county farmers: raspberries. Along much of the current light rail line through downtown, storage buildings date from Gresham’s fruit processing heyday, the 1920s to the 1960s. Along 8th Street farmers unloaded boxes of berries picked by children, housewives, students, and delivered them for processing at the Gresham Berry Growers Cannery. It was run by the Gresham Co-op, which at one time numbered over 500 growers. There were other processing plants too. Processed berries were shipped to markets in Portland and beyond via rail car. Over the years, the cannery and processing plants expanded into beans, broccoli, corn and cauliflower. By 1960, 18 million pounds of produce were processed here. In 1965, times were changing: there were issues with sewage and waste disposal with the city, and encroaching suburbia was transforming former berry lands. Also, some growers were transitioning into higher-value nursery stock. By 1965, the co-op merged with what became Stayton Canning Company, packing under the Flav-R-Pac label and moved out of the area. (It is now part of NORPAC, founded in 1924 as North Pacific Canners and Packers.)

Old Downtown Gresham & the Multnomah County Fairgrounds
Keep walking south on Main past old houses, now businesses on Main’s east side. At 5th and Main, a line of trees marks the former main entrance to the Multnomah County Fairgrounds, here from 1908 to 1969. The fairgrounds extended west from Main. In 1976 the 50 acres were sold to the Foursquare Church which built the building at 701 N. Main Avenue. In 1985, the church sold 35 acres; the land is now the Gresham Town Fair, a shopping center, with acres of ground swathed in asphalt.

Across 4th from it is the Tudor-style Gresham Library, built in 1913, one of over 2,500 libraries worldwide funded by the Andrew Carnegie Foundation. 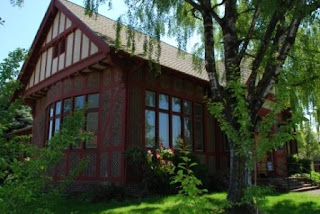 It’s faced in a beautiful burned brick. The architect is Folger Johnson of Portland; one of his most notable buildings is the Town Club, a private women’s club on SW Salmon Street in Portland. He also designed some of Portland’s Carnegie libraries, such as the one in Lair Hill (now owned by Portland Parks).

Look for its series of leaded glass colophon windows. In book publishing, the colophon is a note about the typeface. A less frequent use of the term is for a printer's mark or logotype. In Renaissance-era printing shops, a title page would feature the printer's mark (colophon) near the bottom of the page, usually above the printer's name and city. These marks are what are seen here. 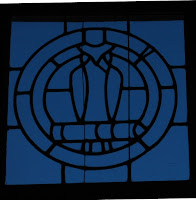 The library was replaced in 1990 by a new library at 3rd and Miller. Now this lovely building is the Gresham History Museum, open 12 to 4 p.m., Tuesdays, Thursdays and Saturdays. Inside, above the door is a WPA-era sculpture similar to those on the high school exterior but made of plaster of Paris and horse hair, on a steel frame.

Powell and Main: The Heart of Old Gresham
Wander further down Main to Powell Boulevard, the core of Gresham’s history, where two pioneer paths intersected:

The two roads crossed in a blocklong union near Johnson Creek (the creek is just south of this intersection in Main City Park); that crossing became the center of the village.

There was once a fountain in the middle of this intersection, with a statue of liberty atop it. Similar to downtown Portland’s elk statue at SW Main between 3rd and 4th Avenues (installed 1900), this one served to water thirsty horses. In 1920s, when the road was being paved for cars, the fountain was deemed a hazard and torn out. Ironically, that sort of traffic calming device is now installed at intersections to make roads safer.

Businesses once lined the south side of Powell. They were set on pilings, because the land was a floodplain. Beyond Johnson Creek is Gresham Butte, an 840-foot high Boring lava dome. Metro acquired 140 acres on it to preserve as a greenspace. Click the link for a hike on the butte.

At this intersection don’t miss a Murdock Manufacturing drinking fountain. It’s the rare solid metal object still made in the U.S.A., in Cincinnati by the same family that has been making fountains for five generations. Enjoy some cool Bull Run water, not far from the source.

From Main and Powell, walk one block east to Roberts Avenue; turn left and then right on 2nd.
At 108 NE 2nd is Dr. Corine Trullinger Chamberlin’s office, built in 1942. Dr. Chamberlin tried to attend the University of Oregon’s medical school but it admitted few if any women. She went instead to the Women’s Medical College in Pennsylvania, returning to Oregon to purchase a retiring doctor’s practice in 1937. Dr. Chamberlin was beloved for her concern not only for the physical health of her patients but for their mental and spiritual health too (her husband was a pastor of the Pleasant Home United Methodist Church). As many as 25 patients would wait at any given time to see her. She delivered more than 5,000 babies. She died in 1981. 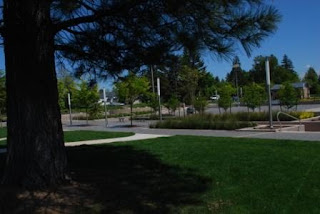 At SE Hood, enter the Center for the Arts Plaza, a park new in summer 2009. This outdoor living room, a la Pioneer Courthouse Square, is broad and open, the former site of a bus parking facility. A lone Ponderosa pine predates this latest incarnation of the landscape. An arts building is planned for the plaza's east side. Summer 2010 events include Monday noontime brownbag concerts and more. See the Gresham Center for the Arts for events.

To end the walk, walk north on Hood Avenue to the Gresham Central Transit Center and board a train to head home or ride your bike south on Main to Gresham Main City Park where you can jump on the Springwater Trail and head west to Portland.

Thanks for all the Gresham info. My in-laws all live there and I've never found it this interesting. Neat post--will have to give it another go in old Gresham!

Thank you for sharing the information about my Great-Aunt Corine Trullinger Chamberlin. She was an amazing lady, ahead of her time. Mark Chamberlin was my grandmothers brother. They were a lovely couple who had big hearts and care for all they met. It's nice to know she is still remembered by others.

Hello Laura..."Denyc" is my Daughter! Aunt Corrine was just that, and actually, the primary support reason I was conceived and birthed! Uncle Mark is my Mom's Brother, etc. The Current Medical Library at Gresham Legacy Hospital, is named in her Distinguished Honor! Again, thank you! Paul, Zig Zag Oregon

I'd welcome contact from the family of Corrine Trullinger. She delivered my sister and 2 of my brothers and I have an interest in the history and influence she has had for our family records.

We were told we live in the same home as Mark and Corine did. It has been extensively changed in the 1980's. We are trying to find old pictures of their yard or home on Regner Road. The historical society said they had none. Can anyone suggest where some might be?