This one-way, 2.5 mile walk in Portland’s Sunnyside and Buckman neighborhoods visits several of what City Repair calls place-making sites. City Repair is an organized group action to inspire communities and people to transform the places where they live by helping them create place-making projects. Place-making, City Repair says on its website, is “the creative reclamation of public space…to create community-oriented places [that] empower our communities and nurture our local culture.” Find a map of these sites at 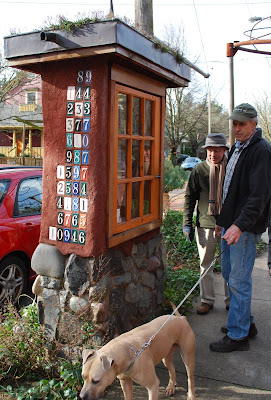 Many City Repair sites have structures built of cob, a material used since humans began constructing shelters for themselves. Clay, straw, water and sand are the ingredients. A lot of sites have green roofs, which complement the cob beautifully.

Well, after observing these place-making sites over the last decade, I’ve had mixed reactions: often delight at the inventiveness, but sometimes a bit of disappointment at their dirtiness and seeming neglect. It’s kind of I feel in the aftermath of a household pet acquisition, after one of my kids has successfully pitched us to get a dog, a cat, or chickens. Her initial enthusiasm is overwhelming, the first weeks of care stellar, but soon neglect ensues: poop piles up in the coop, the dog’s water bowl is dry, the cat is meowing for food. Mom and dad step in to care for the animals. In some of these City Repair projects, it looks like a mom or dad is needed to provide the ongoing care these installations require. What do I mean? Well, message/community boards with yellowing and outdated notices over a year old behind dirty glass doors; a lending library with no books; painted barrels whose plants are flattened and lifeless and whose paint is peeling and mud-spattered.

I started walking at SE Stark Street and Peacock Lane (just east of 39th Avenue) because I wanted to see how Peacock Lane, seen by most Portlanders in the flattering glow of Christmas lights and good cheer, looks in the cold light of day. (http://www.peacocklane.net/ )

Walk south on Peacock Lane to Belmont; turn left on Belmont, right onto 40th, and right at Yamhill, a nice block here. Cross 39th. (Go one block north to Belmont if you don’t want to cross 39th without a light.)

Walking west on Yamhill, turn left on 37th. At Taylor is the first City Repair site: the Memorial Lighthouse. This memorial to a bicyclist hit by a car here in 1998 has a cob column with a living roof and a glass mosaic bench with recycled bike parts worked into the installation. It’s lovely and in good shape.

From Yamhill and 37th, walk south on 37th and right (west) on Main. At 35th and Main are the offices of Southeast Uplift, an umbrella organization that supports the citizens and neighborhood associations of Southeast Portland in their work to create livable, safe and socially diverse communities. (http://www.southeastuplift.org/t.org/) Here are some cob benches in front of the building.

From 35th and Main, walk north on 35th then left (west) on Salmon. In this block is the old Sunnyside School, now an environmentally focused public school. (http://www.sesptsa.com/. In 1994 my oldest daughter attended this school (it was the Family Co-op then) and we parents wanted to install raised beds on what was a large lawn in the front. The school district was against the idea, saying it would be harder to maintain than grass, but ultimately it allowed us two beds, no more. Things have changed a lot: in place of the lawn grow organic grains, cover crops, medicinal herbs, culinary herbs, Oregon native plants, and even chickens. Only a few non-natives remain—a couple of old camellias from BEE (Before the Environmental Era). The school looks great; in the gardens is a cob bench with a green roof. It’s a nice, lively scene on a weekday morning. I sat on the bench for a bit, watching moms walk their kids into the building, overhearing snippets about head lice and after-school playdates.

From Salmon at 34th, walk one block west on Salmon to 33rd, turn right; walk one block to 33rd and Yamhill. Here is Sunnyside Piazza, the second City Repair project, created in 2000. An enormous painted sunflower spans the entire intersection (it’s partly worn away but scheduled for repainting on June 6, 2010.) When freshly painted, it’s stunning. Wooden barrels with plants anchor the four corners, and trellises span each corner’s sidewalk, the best of which is a Fibonacci spiral dome. A kiosk is in the northeast corner; inset in it are numbers to puzzle over and solve.

From the piazza, walk north on 33rd. At 913-915 is an 1892 Queen Anne home restored by Jerry Bosco and Ben Milligan, whose collection of architectural treasures became Portland’s Bosco-Milligan Foundation. (http://www.visitahc.org/). Turn left at Belmont; the Pied Cow, in an 1893 Queen Anne, was Bosco and Milligan’s store where they sold antiques.

From 32nd and Belmont, turn south on 32nd and follow it to Hawthorne (it jogs at Salmon onto a pedestrian-only path). From 32nd, turn right on Hawthorne. Between 31st and 30th is Hostelling International’s Portland Hawthorne Hostel (http://www.portlandhostel.org/). A cob kiosk sits in the corner, another City Repair Project. The hostel itself has a green roof—nothing unique these days—but where else have you seen a green wall? Beautiful. Above it, metal fish leap through the air; behind them, water funnels off the home’s rain gutters into the pipe; looks like water would sheet down behind the fish during a rainstorm. 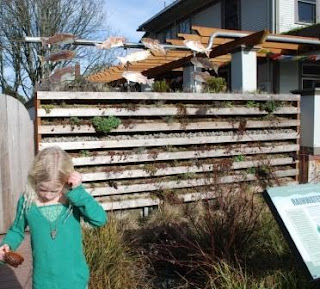 The Living Wall, a Bureau of Environmental Services project

Walk west on Hawthorne, have some coffee. Turn right on 22nd, then left on Madison. At 2111 SE Madison is the best place-making site of the walk, in my opinion. It’s a couple of benches (one of which is a voluptuous bejeweled mermaid) to relax on, and a bulletin board. Cob, of course.

From Madison, turn right on 20th, left on Taylor (passing the Colonel Summers Community Garden), and angle through the park to get to 19th. Walk north on 19th to Alder. Just past it, at 617 SE 19th is a mosaic bench and cob kiosk. Beyond them is the intersection of 19th and Washington, where the Buckman Maze Intersection Repair is supposedly located. I could barely discern a maze painted on the pavement; perhaps someone decided that people walking a contemplative maze in the middle of an intersection was not such a great community-building idea.

From 19th and Washington, walk west on Washington to 16th and turn right. At 16th and Stark, I looked for the Buckman School Bench, listed on City Repair’s site, but didn’t find it. But the tile mosaic wall along Buckman School is gorgeous, and made a fine exclamation point to this tour of outdoor, community-built art.

Hi Laura,
I work at the Hawthorne Hostel and your post happened to come up on my Google Alert. It's weird bc in the alert it seems you have the living wall and fish scuplture at the hostel, but on your blog it comes up as another location. FYI-our cob bench was a City Repair project, the living wall/fish scuplture/rainwater harvesting system was a PDX BES project. I'll be happy to talk to you about it. Love your walk there book by the way!
Take Care,
Talbot
Portland Hawthorne Hostel Manager
talbot@portlandhostel.org

Talbot, thanks for finding that glitch! I'd pasted the photo in and it obliterated some text. Fixed now.

My daughter, Capra J'neva volunteered with City Repair to do some of these projects.

Thanks Laura for highlighting this.

here is a google map of the walk. This is a little easier to following when jogging with kids in the stroller.

Thank you Todd! That's a brilliant addition. I will do this for other walks. Not sure how yet to do it yet... I have an app that does this too, but haven't put 2 and 2 together to put on the blog.

Thanks for sharing your amazing blog. I finished this right now and thinking that it is the perfect blog I was looking for . Never stop writing, and keep up such an informative blogs. Best wishes for you.
Glass Mosaic Tiles